Bitcoin in many developed nations such as the United States has taken on the role of being a store of value, often affectionately referred to as “digital gold.” Those invested in Bitcoin think of it as just that, an investment, instead of a currency which means few transactions are occurring. One might be quick to point out the growing use of Bitcoin in everyday commerce and its extensive use in developing nations worldwide, especially those nations whose economies rely on migrant remittances, such as El Salvador, where Bitcoin was recently recognized as legal tender. Even in countries like El Salvador, a recent survey [2] revealed that when Salvadorans can choose which currency to pay with, 91.4 percent of people use the dollar, while only 4.9 percent favor Bitcoins. Assuming Bitcoin’s final position in the global financial system is primarily that of a store of value, and transaction numbers fail to explode as would be seen following the widespread adoption of Bitcoin as everyday money, Bitcoin’s long-term sustainability is in jeopardy. 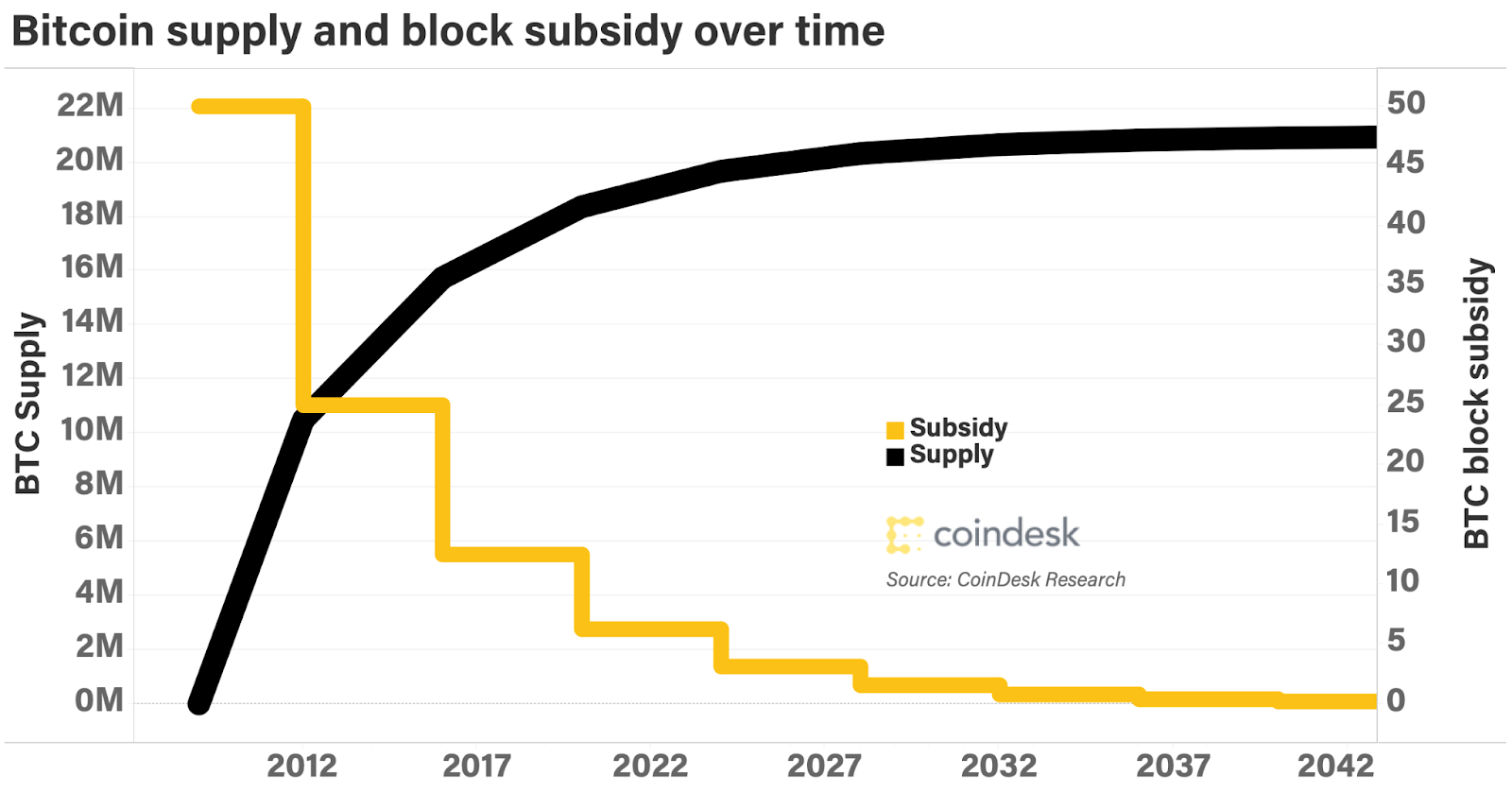 Bitcoin relies on an army of miners who use their computing capabilities to verify bitcoin transactions, making Bitcoin secure. These miners get rewarded both with issuance in the form of mined bitcoins called block rewards as well as a portion of the transaction fees that the verified block will bring in. Currently, close to 98% of all the rewards earned from bitcoin mining come from block rewards and not transaction fees. This is a limited resource as there is only around 2 million Bitcoin left to be issued out of a 21 million coin total. The amount of new coins issued per successful validation of a new block decreases in half about every four years. Currently, a miner earns 6.25 BTC per block, and in a decade, that figure will be below a single Bitcoin per block.

To further drive up costs to miners, the difficulties of these validations are increasing. In 2009 the difficulty level of a transaction was 1 and is now on level 22 trillion and rising biweekly. This means that more complex equipment is needed and more electricity required to earn a single Bitcoin, making Bitcoin-mining an ever-increasingly unattractive business venture. Bankless author Ryan Sean Adams wrote, “By 2032, BTC-denominated block rewards will be only 6% of today’s rewards. Yes, we can assume BTC will have appreciated between now and then—for example, if the price rises to $140k per BTC, then 2019 level security budget may be maintained. But is 2019-level security enough for a multi-trillion dollar network?” and is $140,000 per Bitcoin a realistic price target?

If Bitcoin cannot reach that high of a price, miners will have to rely more on transaction fees to pick up the slack. Currently, there are not nearly enough transactions to subsidize the loss of block rewards, but someday that might change. If it doesn’t change drastically, fewer miners will continue mining Bitcoin, thus fewer people securing the Bitcoin network. With fewer miners handling transactions, transaction fees will rise, and people will pay more per transfer. This further disincentivizes using Bitcoin as a currency, making people more likely to see it as a store of value. This is a vicious cycle that, left unfixed, will lead to the ultimate collapse of the Bitcoin system as eventually, the low transaction numbers coupled with the loss of block rewards leads to fewer miners and a less secure blockchain.

Some experts suggest that it is inevitable that Bitcoin will need to change its monetary policy to allow for issuance to continue past the 21 million mark. With the one core promise of Bitcoin being that no more will ever be issued, Bitcoin investors ask when they inevitably do issue more coins, will Bitcoin still be Bitcoin?